Adoption data for the financial year 2017/18 is now available and while some aspects look more positive, following revisions to previously published data, there are still causes for concern. In addition to my analysis of this data, this month I am going to make a prediction about what I think the future holds – I estimate that 3,500 children would be matched in 2018/19 and 2,700 children would be waiting on 31 March 2019. Fingers crossed this doesn’t make me look foolish in a year’s time! 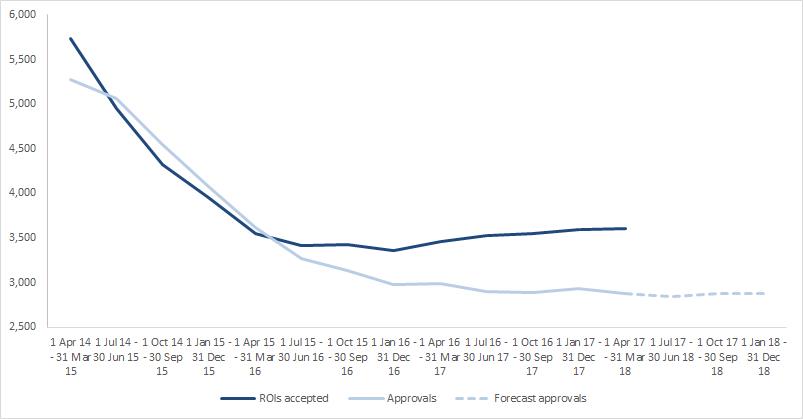 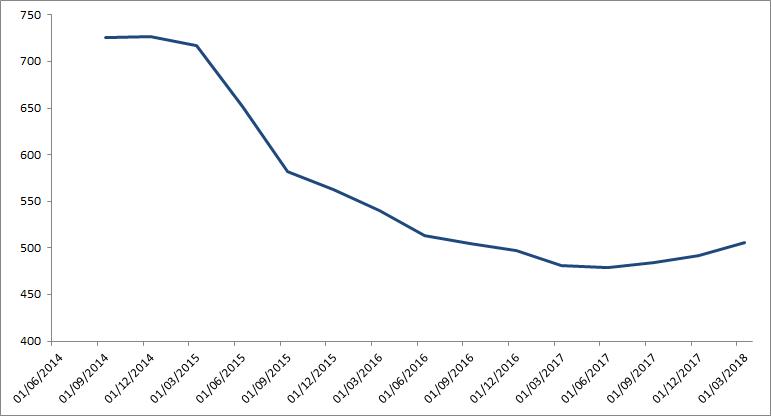 With this in mind, the key question is how long will it be before the situation improves? I have been working on a model that I hope will give us a means to answer this.

Any model has to incorporate a number of assumptions. For example, data on the number of children whose plan changes from adoption and the number of approved adopter who resign are not published at the moment but they are key elements to predicting how many children and adopters will be in the system at a given time. Also, it assumes that the ability of social workers to assess the suitability of people to be adopters is relatively consistent over time.

I have put in a request for the actual data, which I hope will be provided later this month, but for now this gives me a reasonable proxy.

Do you think these two formulae are correct?

The basis of my model is a correlation that I have discovered recently. I had hypothesized that the chances of a child being matched for adoption would depend on how many families were available – this seemed logical to me as a shortage of adopters would limit the number of children who could be matched.

So I decided to compare these two factors – the chart below shows the adopter gap (red) and the chances of a child being placed (blue) for each quarter since 1 April 2014. 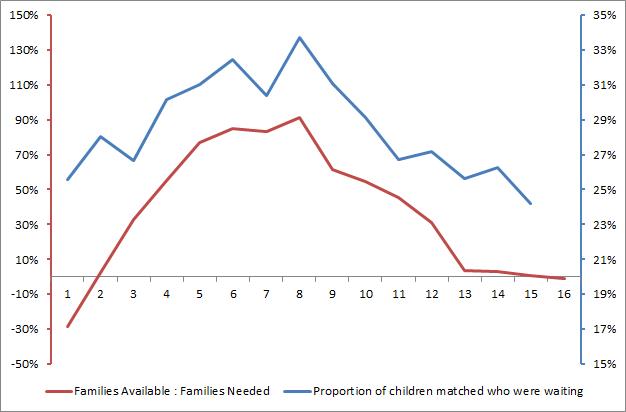 As the published data is estimated, rounded and aggregated, the charts have jagged lines. However, when I calculate the trend lines for each indicator there is a clear correlation between the two: 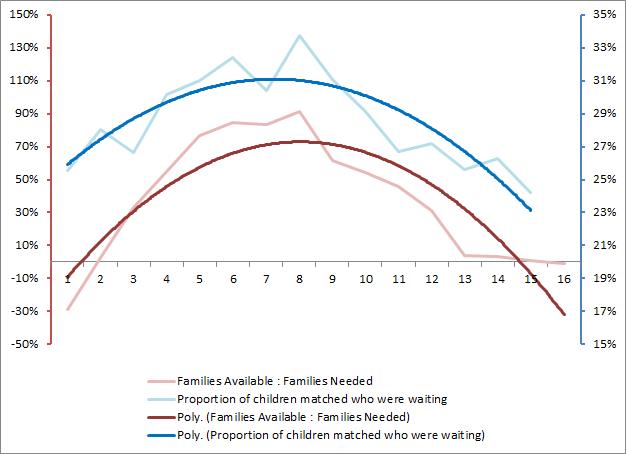 This clearly shows that both sets of data follow a similar path.

This correlation gives me a means of predicting what percentage of children would be placed in a quarter based on the adopter gap at the end of the previous quarter – a unique insight.

The model also requires assumptions to be made on the number of BIDs, changes of plan, accepted ROIs and adopter resignations there will be in the future, as these determine the flow in and out of the system. For example, let’s assume that in 2018/19 there will be:

I believe this takes me one step closer to answering a question I have had for a while – how much ‘choice’ do we need in the system? We know that simply having an adopter gap of 0% is not enough – if it was we would be matching all the children waiting. Clearly not having enough families makes it impossible to match all children, but how big a surplus should we be aiming for if we want to match children an average of 4 months after a Placement Order is granted?

The missing piece for me now is to determine what, if anything, influences the volume of changes of plan and adopter resignations. As you can see, it is possible to use this model without this insight and it might not add anything, but there is only way of being sure. Hopefully this data will be available one day soon.

What do you think of this analysis and the concept of ‘choice’? Please add your comments and questions below so that we can develop this thinking together.

If you would like support from Coram-i to develop sufficiency plans for adoption or fostering then contact us.